Skip to content
Wit grateful thanks to Wikipedia.
Creyke’s Siding and Moorends Works were both located close to the main railway line from Doncaster to Goole, and were served by sidings. Medge Hall Works was similarly close to the line from Doncaster to Grimsby, and was also served by a siding.[30] Swinefleet Works had their own 3 ft 7 in (1,093 mm) gauge tramway, which ran northwards to a wharf on the River Ouse near Swinefleet Clough. The line was around 2 miles (3.2 km) long, and had a single steam engine, built by Webster, Jackson & Co. of Goole.[31] The Goole and Marshland Light Railway and the Isle of Axholme Light Railway were authorised by Light Railway Orders in 1898 and 1899, and became the Axholme Joint Railway after a takeover by two larger companies in 1901. Following discussions, to try to alleviate a level crossing of the tramway and the new railway, a siding was constructed to Swinefleet Works, and the tramway was lifted in 1903. The railway company also built a 5-mile (8.0 km) branch from Epworth in 1909,[30] in the hope of gaining the peat traffic from Hatfield Works, but they continued to cart their output north to Maud’s Bridge, on the Doncaster to Scunthorpe line. The railway built a loading dock in 1911, and still did not gain the traffic, but finally in 1913, agreed to build a siding into the works in exchange for all the peat traffic.[32] Thus all of the British Moss Litter Company’s works could export their produce by rail.[30]

A system of horse-drawn tramways was used to move the peat across the moor from at least the 1890s, since the lines are marked on the 1890 Ordnance Survey maps,[33] and Booth includes a picture of Moorends Works taken in the 1890s, showing both standard gauge wagons and the3 ft (914 mm) wooden peat wagons used internally.[34] Rotherham includes an engraving of a peat wagon in his book, consisting of a farm cart, still with its road wheels attached, but with a four-wheeled bogie under each of the axles to allow it to be pulled along the rails by two horses. However, no indication of a date is given.[35] The rails were quite light, at 9 or 12 pounds per yard (4.5 or 6.0 kg/m), but were gradually increased to 18 pounds per yard (8.9 kg/m), and by the 1980s, when locomotives were in use, rails of 30 pounds per yard (15 kg/m) were installed.[36] The flat-bottomed rails were initially made of iron, but were later replaced by steel rails. The tracks were referred to locally as trams, rather than tramways.[37]

The first use of powered vehicles on the tramways occurred in 1947, when one of the fitters at Moorends Works built a machine from a wooden wagon frame and parts from an Austin Swallow car. Although trials were carried out in which peat wagons were towed, it was mainly used to transport personnel around the moors. It had an 8-horsepower (6.0 kW) engine, was later based at Swinefleet Works, and was derelict by 1960. The first purpose-built locomotive was also based at Swinefleet, and was bought in 1955. It was probably built by James & Frederick Howard of Bedford, and was a four-wheeled machine, fitted with a petrol engine, which was replaced by a Dorman diesel engine within a year as petrol was rationed at the time, due to the Suez Canal crisis. It was sufficiently successful that two horses were retired, and the company soon realised that the cost of owning locomotives was much less than the cost of owning horses, since they did not need to be fed and watered when not actually working.[38] 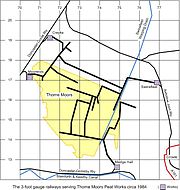 Map showing peat railways on Thorne Moors circa 1984, with older links to Creyke Siding and Moorends Works. The Axholme Joint Railway had also been lifted by this time.

The company ordered two new locomotives from the Lincoln-based firm of Ruston and Hornsby in 1959. They were described as class LBT locomotives by the manufacturer, and were fitted with 31.5 hp (23.5 kW) two-cylinder engines. One went to Swinefleet, after which the Howard machine was scrapped, and the other went to Medge Hall. A third locomotive of the same type was then ordered for Hatfield Works, allowing the horses there to be retired. The Medge Hall engine was transferred to Swinefleet when the works closed in 1966.[38]

The next acquisition of locomotives took place after the British Moss Peat Company was acquired by Fisons in 1963. They ordered three 8.5 hp (6.3 kW) machines from R A Lister and Company, who were based inDursley, Gloucestershire. They consisted of little more than an engine and driver’s seat mounted on a chassis, and were used on the moors where the peat was loaded into wagons, only returning to the works for maintenance. Two were delivered to Swinefleet in 1964, and one went to Hatfield. A second machine for the Hatfield operation was ordered in 1967. Wooden peat trucks were gradually phased out following the purchase of 100 steel wagons in 1963 and 1964. They were manufactured in Leeds by Robert Hudson (Raletrux) Ltd, and were subsequently fitted with a fine inner mesh, to enable them to carry fragmented peat rather than turves. The new wagons had a side-opening door, and a tippler was installed to allow them to be emptied automatically.[39]

On the moors, when dried turves were ready to be collected, temporary track sections were laid at right angles to the main line, and a portable turntable was installed. A rake of twelve wagons could then be moved onto the temporary track, one at a time, to be filled by a ‘filling gang’. Each wagon held about a ton, and once all twelve had been manoeuvred over the turntable back onto the main line, they would be pulled to the works by horses.[40] With the advent of the small Lister engines, a new system was used, where three curved sections of track were used, the end one being clipped onto the top of the main line track. The engines could then push a line of forty or fifty wagons onto the temporary track. Cutting of the peat was mechanised from 1963, with the introduction of German peat-cutting machines, and by 1970, all hand cutting had ceased. Loading of the turves into wagons was also initially by hand, but gradually ‘sod collectors’ were introduced, which at Swinefleet had a 25-yard (23 m) conveyor and at Hatfield a 44-yard (40 m) one. These enabled a single side track to serve a much wider section of moor, without having to move the track.[41] Loading turves onto the start of the conveyor was still done manually, but it became difficult to find people who wanted to do the work, and so Hymac loaders were used to load peat directly into the wagons. The success of this process at Hatfield in 1981 lead to it being used at Swinefleet as well.[42]

The next development was the introduction of surface milling, which began at Hatfield in 1986 and at Swinefleet in the following year. Once an area had been drained, all vegetation was removed from the surface, and a thin layer of peat was removed by a mechanical harvester. It was stockpiled on the moors, and later loaded into wagons by a Hymec loader, to be bagged at the works. Most peat by this time was used for compost or in growbags. The milled peat was much finer than the previous peat sods, and the mesh-sided wagons were unsuitable for transporting it. A programme of fitting wooden boards to the insides of the wagons was begun, but by 1989, solid steel wagons were being fabricated, reusing the frames from the original wagons. All the wagons at Hatfield had been upgraded by May 1990, with those at Swinefleet completed afterwards. Trains of the new wagons were much heavier, particularly when loaded with milled peat, and the existing locomotives were inadequate. Tenders were invited for some more powerful locomotives, and three machines were ordered from Schöma of Germany. Two were delivered to Hatfield in 1990, and the third went to Swinefleet in 1991. Each consisted of a CHL-60G master unit, rated at 65 kilowatts (87 hp) with a bonnet and cab, and a CHL-60T slave unit, looking more like a flat-bed truck, with a second hydraulic motor. They were much more powerful than the engines they replaced, with the four-axle arrangement ensuring that the axle loading was low enough for the existing track, and they were very popular with their operators.[43] By the late 1990s, they were wearing out, and although enquiries were made, with a view to purchasing replacements, the company asked Alan Keef to recondition them. They worked on Thorne Moors removing stockpiled peat until 21 October 2005, and on Hatfield Moors until 2006. They were stored at Hatfield once rail operation had ceased, and were still there in 2008.[44]

In 1935, there were 20 miles (32 km) of tracks on Thorne Moors, with 150 peat wagons and 18 flat wagons. There was an additional 1.5 miles (2.4 km) of temporary track. 50 peat wagons and six flat wagons ran on 6 miles (9.7 km) of permanent track on Hatfield Moors, where there were 0.5 miles (0.80 km) of temporary track.[27] By 1989, there were about 8 miles (13 km) of permanent track on Hatfield Moors, and double that on Thorne Moors.[45] Following the arrival of the Dutch workers in the 1890s, the community continued to expand with the arrival of workers from the Netherlands until about 1912, but most had returned to their country of origin by 1914.[46] In the 1930s, the British Moss Litter Company employed around 160 people, and haulage was achieved by twelve horses. During the Second World War, the Ministry of Supply ran the works, and the workforce dropped to 138, although there were still twelve horses. After the war, several of the men were assisted by their wives, who helped with the stacking of the peat, but did not get paid for their labour. Numbers had dropped to 118 by the 1960s, although a number of unpaid wives were still working on the moors.[47] With the increasing sales of peat for gardeners, the workforce increased to 185 by the mid-1970s, swelled by up to 90 contract workers during busy periods.[48] The total annual output of dried peat at this time was around 45,000 tonnes, produced from 400,000 tonnes of wet peat, all of it going to the horticultural industry.[49] Swinefleet Works stopped production in July 2000, and was fully decommissioned by September. Subsequently, peat from Thorne Moors was transferred to Hatfield for processing.[50]

Several redundant locomotives were bought for preservation by Cliff Lawson of Tring. The group included three machines made by Ruston and Hornsby, two made by Hunslet, and two made by Lister. The eighth engine bought was the Diema, which was a hybrid made from the frames of two machines. Restoration involved splitting the components apart, and using them to rebuild both of the original locomotives, resulting in nine locomotives being preserved. Lawson re-gauged all of them to 2 ft 6 in (762 mm), and they have all been restored to working order.[51] Lister 53977 was loaned to the Doncaster Museum and Art Gallery in 2007.[52]